Saint Ninian’s is a parish church in the north-east of Douglas in the Diocese of Sodor and Man, the oldest Diocese of the Church of England. Its patron is the Church Pastoral Aid Society (CPAS). The church itself is the second youngest on the Island (All Saints being the youngest).

The church was founded and built by a bequest in the will of Henry Bloom Noble which provided both the land and the funds for the building. His will directed that steps be taken to ensure that ‘the said church be served by clergymen of Evangelical and Protestant principles’. The aim at the time was for it to be the new Cathedral church for the Island but the the Diocese did not want it nor could afford it. When it was built it was in the middle of fields with ‘an unencumbered view of the hills.’

The dedication reportedly comes from the fact that Noble, who was born in 1816, lived at Brougham, near Penrith which has a Chapel of Ease dedicated to St Ninian; and of course Ninian was born in Cumbria too, purportedly the son of a tribal chieftain.

The church was designed by the architect Mr W D Caroe of London and built by R Costain of Liverpool. It was dedicated in 1913 and consecrated in 1914. The tower stands 85 feet (26 metres) high and has a single bell which weighs 17 and a half cwt (800 kg). The Norman and Beard organ has 1,249 pipes.

The architects plan of the proposed church was dated 16 August 1910. At the time the site was chosen, thick woodland, some still existing, obscured what was otherwise a commanding feature un the landscape, and so Mr Caroe recommended that a tower should be incorporated in the scheme. The tower is so placed that it in no way obstructs the open nave and allows as much outside light as possible to enter the church.

Apart from the prominence of the building when viewed from afar, the south-easterly aspect as presented to the sea, confirms the wisdom of the architect’s advice. The late Mr A W Moore, then speaker of the House of Keys, was anxious that an early style of traditional ecclesiastical architecture should be adopted. He felt that with the rough building stone which the Island afforded, this simple type of building lent itself to the use of local materials. It is believed that the building of the stone walls which vary from 18″ to 27″ in thickness, was commenced by workman from England, but as they were not sufficiently proficient in using the local rubble stone, Manx masons were subsequently engaged. This would appear to be borne out by a noticeable change in the walling at a height of about ten feet. Only in the columns and to a certain extent in the windows was dressed sandstone form St Bees used. It is interesting to see on a number of stones forming the columns “masons marks”, among which are outlines of the Three Legs of Man, indicating that Manx masons were employed.

The cost of the east windows was met by the Noble Trustees who also provided a sum of over £1,000 for the organ. 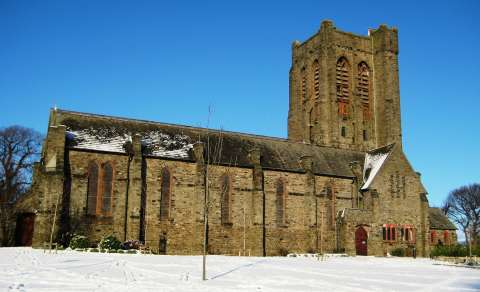 The overall dimensions of the church are 140 feet long, 63 feet across the transept. The nave is just over 100 feet long. The height of the main building is 45 feet and that of the tower 85 feet. A spiral stone staircase to the roof of the square tower comprises of 118 steps. Access to the belfry is gained from this stairway. The bell is about three feet high, the circumference of the rim some twelve feet and weighs sixteen hundredweight. Many years ago it was deemed inadvisable to swing the bell because of the vibration which was damaging the structure, so the bell now remains in a stationary position and is tolled by being struck with the clapper. Provision was made for the installation of a peal of bells however these were never installed although one rack can still be seen in the belfry.

The new St Ninian’s “Parish Centre” was built in 2007 and provides attractive and modern facilities for the Church and the community.

We use cookies on our website to give you the most relevant experience by remembering your preferences and repeat visits. By clicking “Accept All”, you consent to the use of ALL the cookies. However, you may visit "Cookie Settings" to provide a controlled consent.
Cookie SettingsAccept All
Manage consent

This website uses cookies to improve your experience while you navigate through the website. Out of these, the cookies that are categorized as necessary are stored on your browser as they are essential for the working of basic functionalities of the website. We also use third-party cookies that help us analyze and understand how you use this website. These cookies will be stored in your browser only with your consent. You also have the option to opt-out of these cookies. But opting out of some of these cookies may affect your browsing experience.
Necessary Always Enabled
Necessary cookies are absolutely essential for the website to function properly. This category only includes cookies that ensures basic functionalities and security features of the website. These cookies do not store any personal information.
Non-necessary
Any cookies that may not be particularly necessary for the website to function and is used specifically to collect user personal data via analytics, ads, other embedded contents are termed as non-necessary cookies. It is mandatory to procure user consent prior to running these cookies on your website.
SAVE & ACCEPT